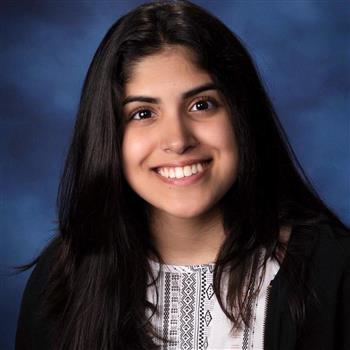 Ravina Thakkar (4th Dec 1999 – 29th August 2019) beloved daughter of Bhavesh and Krishna Thakkar, passed away due to complications from Cystic Fibrosis, at the young age of 19.

Even during the last moment of her life, we witnessed her serene peaceful smile, for which she was known for throughout her life!

Ravina completed writing her first book “The Adventure of a Lifetime” at 8 years of age, which later was published when she turned 13 years old with the help of Make-a-Wish Foundation & Sourcebooks. In addition to her incredible smile, she was known for her quick wit, kind and compassionate nature among many other amazing qualities.

Ravina was a rising sophomore at Northwestern University in Evanston, IL. She was majoring in English and Social Policy. She was the recipient of the Vertex Pharmaceutical scholarship. Despite her battle and spending an average 3 hours per day for taking treatment for CF, she graduated high school with honors and made the Dean’s List during 2019 winter & spring quarters at Northwestern. She served on the executive board of Chapin Residential College at Northwestern campus and was part of the improv group, Titanic. She was committed to helping people gain access to healthcare by removing barriers, and she had an interest in conducting research on how marginalized populations are impacted by their inability to obtain quality healthcare. She takes part in any discussion, but issues concerning feminism was one of her most favorite topic to discuss and to find solution for. During summer 2019, she was working an internship at Sourcebooks in Naperville, IL. She was always writing and has a few unpublished unfinished manuscripts.

Cystic fibrosis is a hereditary disease that affects the lungs and digestive system. The body produces thick and sticky mucus that can clog the lungs and obstruct the pancreas. CF is life-threatening, and people with the condition tend to have a shorter-than-normal life span. But instead of wallowing in her condition, Ravina used her time inspiring everyone with her humorous approach to living with her terminal illness. Ravina and her family attempted every year to spread awareness and collect donations in hopes to find a cure for Cystic Fibrosis. In her own words “Recently, you might have heard about Five Feet Apart, a rom-com detailing the lives of two love struck teens who can’t touch because they both have a chronic lung disease, CF. Know that the CF experience is less Five Feet Apart and more Mission Impossible, because sometimes staying alive and functioning is like fighting against my own body. CF isn’t an hour-and-a-half movie theater experience, something fun over popcorn and Kleenex. It’s a lifelong battle that many will ultimately loose, because CF is a progressive disease that only worsens with age. Keep raising awareness. I know we can do it. I know that, together, we all end CF one day, that it will stand for cure found sooner than later.”

Ravina made a profound impact on all who knew her. Despite spending nearly every hour of her two decades fighting CF and its consequences, her courage in the face of a prolonged illness was an inspiration. She never asked, “why me?” In her own words as recorded in her documentary created by her friends which we found after she passed away, she said “For me it is just like what happened has happened, there is things you can’t change. Like I can’t change the fact that I have CF and I can’t change my lungs. So I just accept it and move on. And I think I have so many other good things in my life that lots of time they overshadow CF and I mentally put that on a back burner and that’s how I stay so positive”

Ravina - the world will never be the same for us without you. We will miss you terribly but we will feel immense pride because your positive attitude toward life was so inspirational to many. We will remember your smiling face now and always.

1. MKMindy Kaling
This is to honor Ravina, a young woman I wish I had gotten to meet. She was obviously extraordinary, and loved by everyone she met.